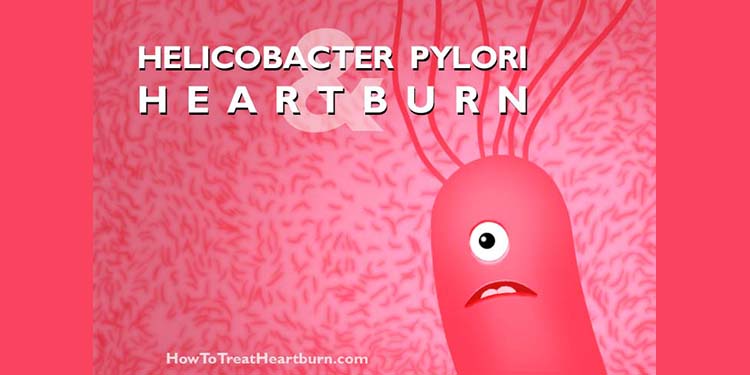 What is Helicobacter Pylori?

Helicobacter pylori or H. pylori is a highly developed bacteria found in the upper gastrointestinal tract of more than 50% of the world’s population.1 It is most prevalent in developing countries and less so in industrialized societies.2

Helicobacter pylori cause gastritis, an inflammation of the stomach lining. It can cause ulcers in the stomach and the duodenum, the upper section of the small intestine just below the stomach. Its presence can even lead to cancer.3

For the purpose of this article, we will focus on how a Helicobacter pylori infection relates to heartburn, how it can be prevented, and how it is treated.

How Helicobacter Pylori Relates to Heartburn

The relationship between Helicobacter pylori and heartburn has been studied for years with no definitive conclusion.

Let’s look at why Helicobacter pylori might have a negative or positive effect on gastroesophageal reflux disease (GERD), a chronic condition where acid refluxes into the esophagus causing heartburn.4,5,6

The controversy revolves around acidity levels and the possible benefit of lower acid levels.

Some studies show a direct connection between Helicobacter pylori and GERD, some show an inverse connection, and others show no connection at all.

Stomach acids and digestive enzymes break down food along with most bacteria and viruses.

Helicobacter pylori have evolved to adapt to the harsh environment of the stomach. The unique shape of this bacteria allows it to penetrate and survive in the protective mucus that lines the stomach.

In addition, it protects itself from stomach acids that penetrate the mucus by producing urease, an enzyme that converts urea found in the stomach into bicarbonate and ammonia.

The result is a layer of protection that neutralize acids surrounding it.3

As overall stomach acid is neutralized, Helicobacter pylori and other harmful bacteria thrive.7,8

These other harmful bacteria can cause small intestine bacterial overgrowth (SIBO). SIBO and reduced stomach acid levels both add to the risk of heartburn by slowing digestion.

In addition to the issue of reduced stomach acid, Helicobacter pylori infections can cause burping, bloating, and vomiting.9 The burping and bloating both cause pressure on the LES allowing stomach acids to leak through into the esophagus. And vomiting irritates the esophagus exacerbating the overall problem making the esophagus more sensitive to the presence of acids.

At this point, a vicious cycle could occur. Heartburn medications are taken to relieve that pain of heartburn, but the reduction in acids can allow these bacteria to thrive. The eradication of the Helicobacter pylori infection may be necessary to break this cycle.

Some believe a Helicobacter pylori infection can benefit those with GERD. It lowers stomach acid levels reducing the irritation of GERD-related heartburn. However, lowering of stomach acid levels in any manner does not treat GERD. It only masks the symptoms of GERD by reducing the pain associated with heartburn. Lifestyle changes for most people will eliminate GERD and the need for acid reducers.

There may also be an argument of benefit for those who suffer from hyperacidity, a condition of excess acid production. The neutralization of stomach acids by Helicobacter pylori could be seen as a beneficial side effect.

How is Helicobacter Pylori Infection Diagnosed?

In the Helicobacter pylori breath test, urea is administered by mouth to check for the presence of Helicobacter pylori. The bacteria produce an enzyme called urease that converts urea into carbon dioxide. If the bacteria is present, increased carbon dioxide levels will be detected. For proper readings, antibiotics, bismuth medications, and PPIs should be discontinued for up to two weeks before the test.

The Helicobacter pylori breath test can be used as a follow-up test to see if the bacteria has been eliminated.

The Helicobacter pylori stool test checks for traces of the bacteria that are eliminated through the bowels. This test can also be used as a follow-up test to see if the bacteria has been eliminated.

An endoscopy is typically done if there is a need to check for an ulcer, treat bleeding, or to biopsy for possible cancer. An endoscope is a narrow tube, with an optical instrument and attachment for obtaining tissue samples called biopsies. The biopsy is checked for the presence of Helicobacter pylori and cancer.

Helicobacter pylori are often acquired during childhood and the risk of infection increases with age due to potential exposure over time. Infection may come from food, water, utensils, or contact with bodily fluids of those infected.

The best forms of protection are to practice proper health habits:

Research shows that Helicobacter pylori infection can only take place when stomach acid levels are not maintained at an optimal level. Over-the-counter antacids my alleviate heartburn, but increase the risk for bacterial overgrowth by 50%.7

Helicobacter pylori and other unwanted bacteria feed on sugars, starches, and grains. To prevent their proliferation, it is best to reduce the intake of these foods.

If you have been diagnosed with Helicobacter pylori, medications are available to kill the bacteria and allow your body to heal. Your doctor will prescribe medications which may include two or more antibiotics, bismuth subsalicylate, and acid reducers. The antibiotics and bismuth subsalicylate will kill the bacteria. The acid reducers prescribed will be a PPI and possibly an H2 blocker. They help the antibiotics work more efficiently and lower acid irritation of the stomach lining to promote healing.9,11,12

Though the presence of Helicobacter pylori may relieve the heartburn symptoms of GERD in some. The negatives of the infection likely outweigh any benefit it might provide. You and your doctor should discuss testing and options if you are suspected of having this infection.

2 Replies to “Helicobacter Pylori and Heartburn”