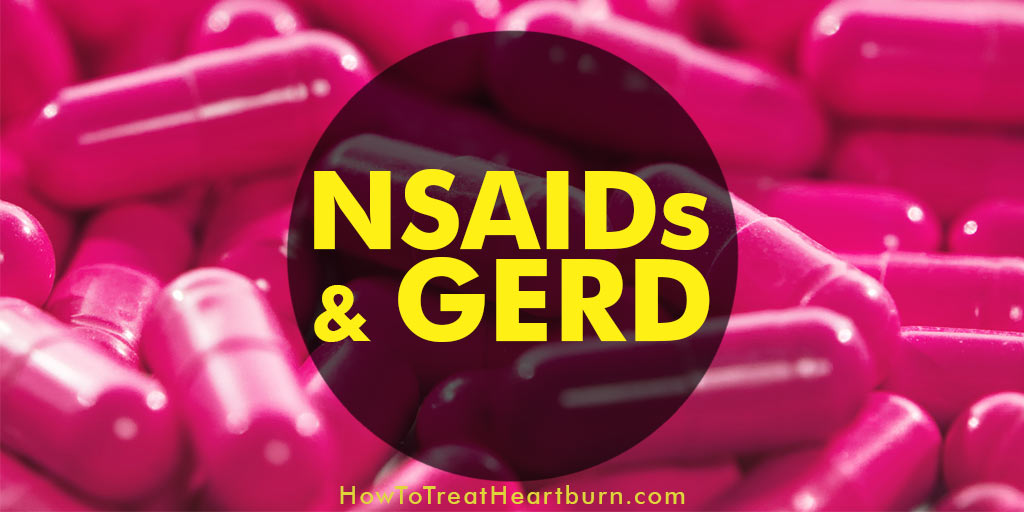 NSAIDs including aspirin and ibuprofen can irritate the lining of the esophagus causing heartburn thus increasing the severity of gastroesophageal reflux disease (GERD) or contributing to its development.

NSAIDs include drugs such as:

Heartburn and Other Gastrointestinal Side Effects of NSAIDs

Gastrointestinal side effects from NSAIDs are common. NSAIDs can cause heartburn, indigestion, abdominal pain, and more by irritating the lining of the esophagus, stomach, and duodenum. Irritation from NSAIDs over time can lead to the development of peptic ulcers.1,2

People with a history of peptic ulcers, GERD, Crohn’s disease, or ulcerative colitis should not use NSAIDs without first seeking physician approval.3

Immediately stop taking NSAIDs and contact your physician if you have severe abdominal pain or blood in your stool.

Please note: There are additional warnings when taking NSAIDs. This post only shows the Advil warning for “stomach bleeding” at the time of this post.

Be sure to follow the guidelines on the medication and your doctor’s instruction. It may sound simple but following the guidelines will help prevent risks of irritation and damage to the gastrointestinal tract.

Take with Food to Protect the Gastrointestinal Lining

NSAIDs should not be taken on an empty stomach. Consider taking them at the end of a full meal or halfway through to “sandwich” the medication in-between food to help reduce its contact with the lining of the esophagus and stomach.

Mucilage, a viscous substance produced by plants, can be used as a natural remedy to coat and protect the lining of the gastrointestinal tract to effectively prevent damage from NSAIDs.

Forms of mucilage to consider are:

NSAIDs disrupt the maintenance and protection of the stomach lining. Mucilage is worth considering to help coat and protect the gastrointestinal lining.

One study done to evaluate the benefit of probiotic supplementation during NSAID use showed that chronic low-dose aspirin users experienced a reduction in small bowel injury when taking Lactobacillus casei.

Though a high quality probiotic may be beneficial, additional studies using a variety of NSAIDs and probiotic strains are needed to make a clear determination as to the benefit of probiotic supplementation during the use of NSAIDs.4

It is common for doctors to prescribe proton pump inhibitors (PPIs) along with NSAIDs to reduce the risk of heartburn and damage to the lining of the gastrointestinal tract.5

PPIs are the strongest stomach acid inhibitors available. They significantly reduce the production of stomach acid to provide the esophagus, stomach, and duodenum (the first part of the intestines) time to heal from irritation and erosive damage. The reduced acid level also helps reduce heartburn.6

PPIs are found in over-the-counter (OTC) and prescription versions. Some common PPIs include:

PPIs do have negative side effects to which you should be aware. If you choose to take them, many advocate weaning off PPIs especially after use because of the acid rebound problem associated with PPI discontinuance.

Conclusion of GERD and NSAIDs

NSAIDs can cause irritation to the esophageal lining causing heartburn. They also contribute to the aggravation and/or development of GERD. Product warnings and physician recommendations should always be adhered to when taking NSAIDs. Before using, discuss the use of mucilage with your physician. Licorice, aloe vera, slippery elm, and marshmallow root may help protect the gastrointestinal tract from irritation.